In this article we are talking about modern Arabic coins (XX-XXI century), otherwise, the topic will be immense, because ancient Arabic coins has very many variations.
So, usually the identification of the coin begins with reading the inscriptions on it. Coins of the Arabic countries cannot be determined in this way - writing is very different. Recently, many Arabic countries duplicate the legend in Latin, which greatly simplifies the definition. But, very often there are also coins with Arabic inscriptions only.
How to be? The first thing that comes to mind is to try to determinate the image on the coin. To simplify the process, I made a small tablet with the most characteristic images on Arabic coins. The country name is a link to the corresponding page of the site.
In this table, only those countries, on some or all of the coins of which, there are no duplicate inscriptions in the Latin alphabet (the rest can be identified by these inscriptions).
You can see there some Arabic coin with eagle - this is very popular image.

The cost of Arabic coins can be viewed in the catalog. By the way, if it was not possible to determine the coin from the pictures, look at the coins of all Arab countries - there are not so many of them.

The second row is the Persian numbers (Iran), they are somewhat different.
In principle, everything is simple - we can to determinate where the denomination on the coin.
Arabic numbers, unlike Arabic writing, are read in the usual way for us - from left to right. Accordingly, 2019 written like this - ٢٠١٩
But the problem is that the calendar in the Arabic countries is different, and it is not even the same everywhere.
The Muslim calendar is called the Hijra and is conducted from the date of the relocation (which is Arabic is the Hijra) of the Prophet Mohammed from Mecca to Medina - this happened in 622 according to the Gregorian calendar. But, the Islamic year consists of 12 lunar (not solar) months, each of which contains 29 days 12 hours 44 minutes. To get the year of the Gregorian calendar simply by adding 622 to the year of the Hijra will not work.
There is a special formula - Year of Hijra * 0.97 + 621.6 = Year of the Gregorian Calendar. For example, the year 1400 AH, widely celebrated, incl. on coins, this is 1400 * 0.97 = 1358 +621.6 = 1979.6. Here is another problem - the Muslim year never definitely corresponds to the Christian one. In this case, 1400 - this can be both 1979 and 1980 (the second option is more common).
And again, not so simple. :)
The coins of the Ottoman Empire (as well as in its dependent countries - Egypt, Morocco, Tunisia) indicated not the date of coinage, but the year of ascent sultan to the throne and the year of his rule. 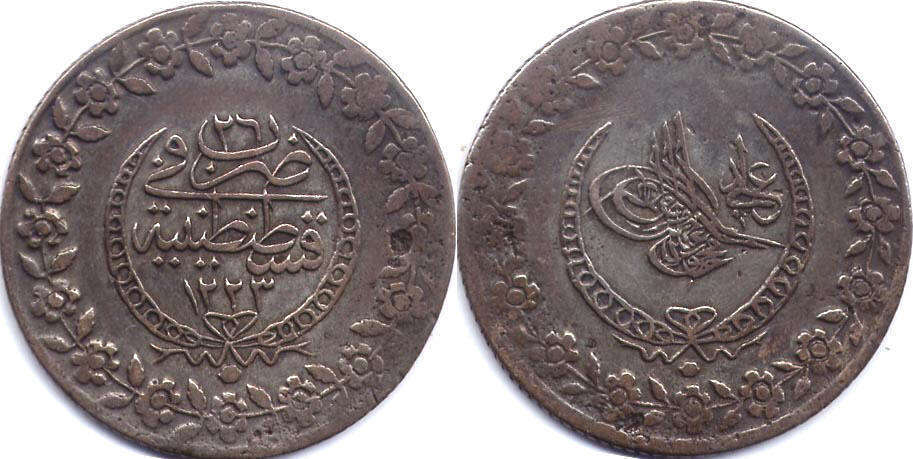 This is the date of the coins of most Arabic countries. But not all countries.
Since 1922, the solar Hijra has been used in Afghanistan. Chronology starts from the same year 622, but years consist of "sunny" months. Accordingly, to get the date according to the Gregorian calendar, you need to add 621 to the year of solar Hijra (in fact, there is an amendment of +1 year, if the date is before March 21, but this is not determinable for coins).
Iran since 1925 to 1976 and then, since 1978 to the present time, also lives on a solar Hijra.
From 1976 to 1978, Iran was used a more exotic calendar - monarchic. Its beginning was considered the date of founding the Persian Empire by Cyrus the Great in 559. This calendar is also based on the solar years, but this is not too significant, from it was used only for 3 years - 1976 (2535), 1977 (2536) and 1978 (2537).