Japanese coins identify - how to read

The numbers in the Japanese system of calculus are formed from digits, just as we have, according to the scheme of discharges. The difference is that in Japanese numbers the bit depth is underlined by an additional digit. For example, the number 48 consists of three Japanese digits - 4, 10, and 8.
Therefore, for the number "100" there is also a special designation, and for example, the number 256 is written as 2-100-5-10-6. But, for the designation of dates on coins, it doesn’t matter - it’s hard to imagine that some emperor could rule for more than 99 years ...

How to read inscriptions on Japanese coins

The inscription containing the dating of the coin consists of the following parts:
1. Name of period - two symbols.
2. Year of current period (era) - one, two ore three symbols.
3. Hieroglyph "Year" - one symbol. 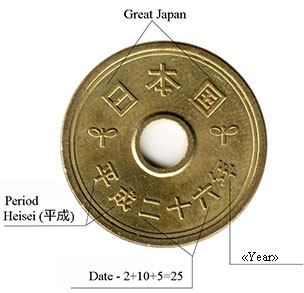 Inscription below from the left to the right:
Heisei period 2 10 5 Year 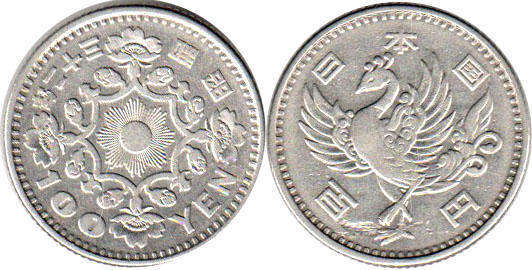 The direction of reading is not specifically indicated, it must be understood logically. For example, on the same 100 yen a year can not be 23, only 32, because first 100 yen coins have been minted in 32 year.