In 1776, the Spanish Vice-Kingdom of Rio de la Plata was formed. The May Revolution of 1810 made it possible to get rid of the viceroy, and the country became known as the United Provinces of the Rio de la Plata. The first coin of the new country was the Argentine real (1813). Silver 1/2, 1, 2, 4 and 8 reais were issued, later (1815-1832) salt coins were also minted with the same denomination, weight and appearance. The coins depicted the coat of arms of Argentina without the sun and the May sun. Soon, almost every province began to mint its own coin.

The first coin that was minted on behalf of the Argentine Confederation was 8 escudos in gold, with a portrait of the dictator Rosas, issued in the province of La Rioja (1836). By 1861, the struggle between the provinces had ceased, but the country continued to be dominated by monetary chaos. Between 1861 and 1881 no coins were minted in Argentina on a national level. There were old reales, private coins, decimal coins, foreign coins, as well as numerous fakes of both.

In 1930, the legitimate president was overthrown. A military junta came to power to protect the interests of foreign capital. In 1942, at the very end of the “inglorious decade”, a new design centavo was minted in Argentina. On the obverse of coins in 5, 10 and 20 centavos, a large image of the denomination appears, from behind which a bull's head peeps out. On the reverse is the same woman, personifying freedom, but with more neatly styled hair and the inscription "LIBERTAD" instead of "REPUBLICA ARGENTINA". Instead of a copper-nickel alloy, aluminum bronze began to be used.

After the war, the "bull" design is retained, and coins in 1, and then 2 centavos become copper. In 1950, commemorative coins of 5, 10 and 20 centavos were issued in honor of the hero of the war of independence. On the obverse, the denomination was minted in numbers, the name of the country, the inscription: "The year of the liberator of General San Martin 1950", and on the reverse - the portrait and name of the general. San Martin successfully ousted the woman-freedom from coins, and since 1952 the coat of arms of the republic from small coins.

The 1970 denomination gave rise to the "Legitimate Peso" ("Legal Peso 18.188"), which replaced the "National Currency" at a rate of 1 "Legitimate Peso" to 100 of the former. Angular centavos were minted from different alloys. 1 and 5 are made of aluminum and magnesium alloy, and 10, 20, 50 are made of brass. On the reverse of the new coins there was again a woman-freedom, as well as both traditional inscriptions at once: “PEPUBLICA ARGENTINA” and “LIBERTAD”.

Another denomination changed "legal pesos" to "Argentine pesos" 1 to 10,000. Centavos appeared again with a woman-freedom, but without the inscription "freedom" and made of cheap aluminum. This turned out to be prudent, since inflation ate up centavos in just a year. In the 84th appeared 1, 5 and 10 pesos with sights. The following year, they continued to issue regular 10 and minted commemorative 50.

In 1985, the government announced another denomination. A new currency appears - the austral. At first, on brass centavos, the letter “A” was simply printed on top. The woman was placed only on a coin with a face value of 50 australes. Other australes carried representatives of the wild fauna on the reverse, and 10 centavos / australes - the coat of arms of the country. In 1989, not only centavos appeared in the coin series, but also the australs themselves. The inscription "centavo" was replaced by a large "A", on the reverse, sights were minted as on the 1984 peso.

The depreciated austral was replaced on January 1, 1992 by the convertible Argentine peso at a ratio of 10,000 australes to 1 peso. The coin series of that period began with octagonal 1 centavos with the name of the country and the inscription "United and Free". They were both ribbed and smooth edged. A coin of 5 centavos - with the May sun, 10 - with the coat of arms of the country, and 25 and 50 - with sights. Centavos of 1992-94 were made in different countries from different metals, and in this respect they are very diverse. Since 1994, they began to issue a bimetallic 1 peso "The First National Coin". 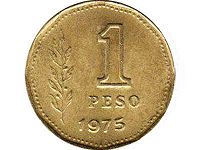 Coins of Argentina since 1821 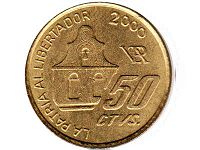 Coins by the denomination 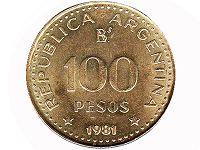 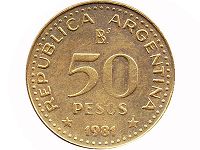 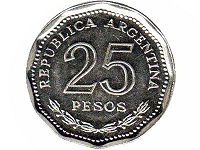 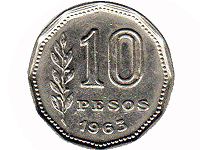 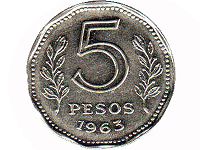 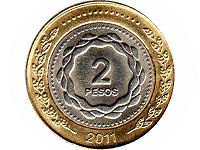 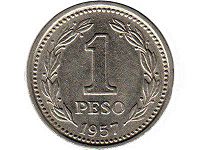 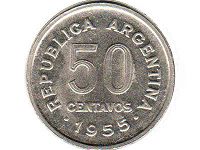 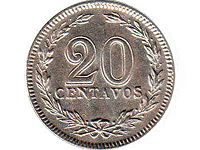 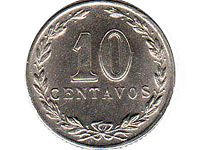 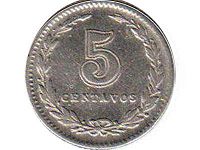 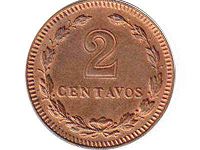 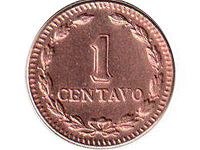 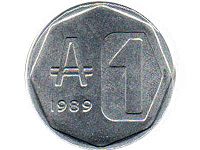 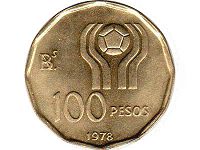 Coins of the Argentinean Provinces 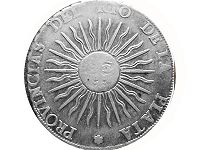 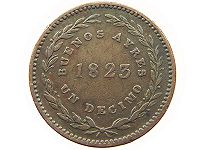 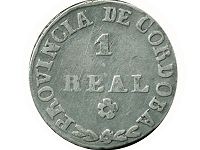