Until the beginning of the 19th century, the Spanish real was used in Chile. In 1810 the independence of the country was declared and a fierce war with Spain began. It was after the defeat of the colonizing troops in 1817 in Santiago that the minting of its own silver coin, the peso, began. The name of the new currency was inherited from the metropolis, where the peso circulated at the end of the Middle Ages.

The peso circulated alongside the real. Sixteen reales equaled one peso, which in turn equaled half a shield. The development of foreign trade required the abandonment of the inconvenient traditional monetary system. In 1851 the decimal system was adopted: the peso was divided into 10 tenths or 100 cents (although the minting of 1/2 and 1 cent coins had been carried out since 1835).

By the 1920s nickel was being added more and more to copper, and soon there were no more pure copper coins left. Disappears from the design and the woman - a symbol of freedom. Meanwhile, inflation continues to pick up. The weight has plummeted.

With the outbreak of World War II, Chile declared itself neutral and only in 1945 did it declare war on Germany and Japan. Pesos and centavos are re-minted from copper. But now the reverse is not a condor, but the hero of the war of independence, Bernardo O'Higgins.

In the postwar years, high inflation led to the penny depreciating so much that in 1955 it was abolished. But first, along with and displacing the weight of copper, comes the weight of aluminum with Bernardo O'Higgins. In 1956, the hero of the War of Independence was joined by an aluminum condor of larger denominations: 5 and 10 pesos. Unlike the old condor sitting on the mountain, the new one is shown flying.

Chileans began to call coins with birds "condors". As a result, a series of coins were directly minted "5 pesos, half a condor" or "10 pesos, a condor". The rarest from this period is the 1 condor coin from 1959.

In 1960, a new monetary unit was introduced - the escudo (= 100 cents), the peso was exchanged for it in a ratio of 1000: 1. On the obverse of the centesimo of this time the year of issue and the denomination in figures framed by ears of wheat, and on the reverse - the name of the country and the image of a condor. In an effort to make the new currency more robust, denominations greater than one hundredth were struck in aluminum bronze.

In 1971, the condor remains only on the 5-cent coin. This coin is now considered rare. The rest of the cents and shields have national heroes on the reverse - Bernardo O'Higgins, M. Rodríguez, J.M. Carrera, as well as President J.M. Balmaceda, whose successors considered themselves in part the communists and socialists who won the elections. The largest coin, 5 escudos, received the image of Lautaro, the leader of the Mapuche Indians. He is armed with a spear and is depicted sitting on a horse.

In 1973, General Augusto Pinochet staged a coup. Due to hyperinflation, the cent falls into oblivion, in 1974 only coins of 10, 50 and 100 escudos were issued, on whose reverse the condor returns, but no longer flying, as before, but perched on the tops of the mountains, tiredly spreading its wings. Inflation in 1975 reached 341%. The 10-escudo denomination is no longer minted. Only 50 and 100 shields with sad birds remained.

In 1975, the Pinochet government initiates an exchange reform. The weight has been reintroduced in place of the shield. The shields were exchanged for pesos at a rate of 1000:1. In a 1-peso coin the undisputed hero Bernardo O'Higgins was represented, and in the symbolic coins of 1, 5, 10 and 50 cents it was again decorated with a condor, but this time hunched over, a predator lowering its head.

In 1976, the obverse of the 5 and 10 peso coins began to represent a winged woman breaking the chains, with the signature LIBERTAD and the date of the military coup 9/11/1973. This female figure symbolized "liberation from Marxism" as it was understood by supporters of Pinochet.

The currency exchange did not have much effect on the economy. In 1980 the cents with hunchbacked scavengers disappeared, the following year the 50 and 100 peso coins appeared. The lady in chains was gone. O'Higgins reappeared in the smaller one, and in the larger one the coat of arms of Chile was painted, adding on the edge the motto: "POR LA RAZÓN O LA FUERZA".

After the restoration of civil authority in 1989, the design of the coins in Chile was changed. On the obverse of all the coins (except the 100-peso coin, where the coat of arms remained) they placed the image of the politically neutral Bernardo O'Higgins, Pinochet's winged woman was no longer used in the design.

Chile marked the new millennium with the launch of a 500-peso bimetallic coin bearing the image of Cardinal Raúl Silva Henríquez, a human rights defender during the Pinochet era. In 2001, a 100-peso coin featured the image of a woman in the national costume of the Mapuche people and the inscription: “MAPUCHE. PUEBLOS ORIGINARIOS". 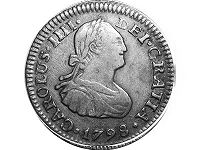 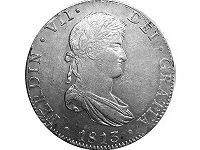 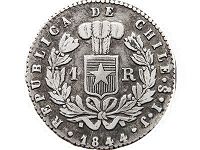 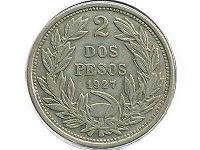 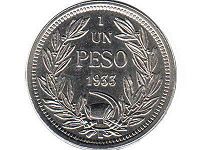 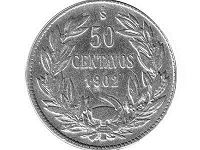 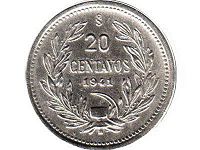 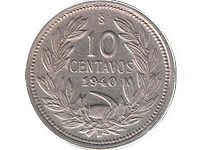 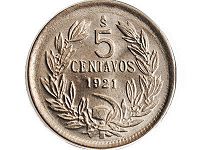 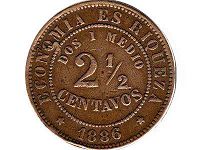 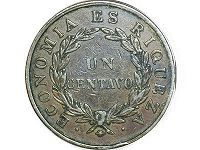 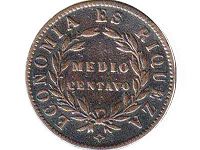 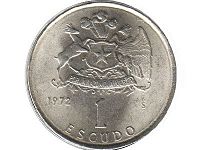 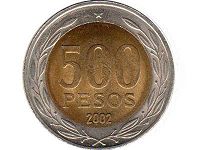 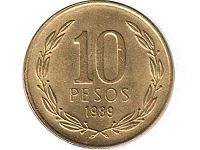 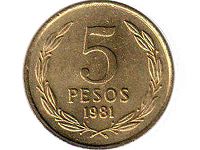 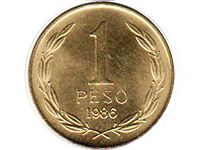 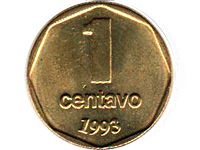 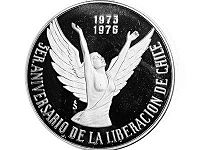 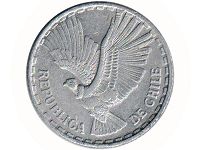