History of the steel penny 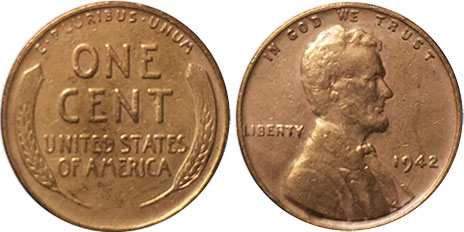 Experimenting with creating coins from other metal and non-metal components began, including even organic glass and plastic. A penny variant with a different design was also considered.
On December 19, 1942, Congress authorized to change the alloy used to strike the cent. New coins began to be minted from zinc-coated steel. The design remained the same - a bust of President Lincoln on the obverse and a denomination in a wreath of wheat ears on the reverse. This type of one cent coin called a "wheat penny" as a variation of the Lincoln penny designed of Victor David Brenner.

The experiment was unsuccessful. Immediately began numerous complaints.
Firstly, the coins quickly failed, since zinc and steel create a galvanic couple and both metals are susceptible to corrosion.
Secondly, the new cents were similar in color and size to a dime, which led to frequent errors.
In December 1943, the US Treasury Department announced that it would stop issuing steel cents. Coins again began to be minted from bronze with a slightly changed composition (95% copper and 5% zinc, while cents before 1943 contained a small admixture of tin).

After the war, the Ministry of Finance began withdrawing steel cents from circulation.

The steel cent is the only regular issue U.S. coin that can be lifted with a magnet. It is also the only coin issued by the United States for circulation that does not contain copper. Despite the fact that even US gold coins contained from 2% to 10% copper (to increase wear resistance).

The Philadelphia Mint mistakenly minted and issued a small series of 1943 copper cents. Currently, 12 such coins are known.
This is a special rarity. One of these coins was first put up for auction in 1958 and sold for $58,000. Now the price of such a coin can be more than $200,000.
Even more rare are copper cents with the mark of the Denver or San Francisco mint - only one copy of each coin known. Denver Mint copper penny 1943 was sold for $ 1.7 million at auction in 2010.
Due to the high cost of these coins, there are a large number of fakes on the market. They are produced either by plating copper on steel cents from 1943, or by changing the number on similar coins from 1945, 1948 and 1949.
Signs of authenticity of the coin: