Index » Help info and articles » 10 unusual currencies around the world

10 unusual currencies around the world 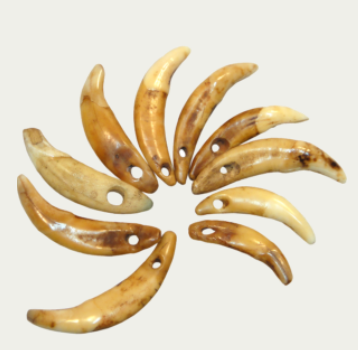 Dogs teeth are the Papuans treasure, the most valuable of money in their possession. Dogs teeth served as decoration and money in different parts of Papua New Guinea. Only the four canine teeth, were of any value and all the other teeth were considered worthless. These canine teeth were accepted as means of payment and the possessor purchased weapons, cattle, grains, utensils, and household items with dogвs teeth. These canine teeth coins were holed and threaded on fibers/cords.

The Abelam and Arapesh, Boiken and Madang wealthy people used strings of dogs’ teeth as currency when paying for brides, land payments and buying pigs and for bartering. Dog teeth were so valuable that possession of a huge number of teeth indicated their wealth and status in their community. The wives and daughters of the influential men used to wear them as necklaces and headdresses. This necklace of dog teeth was worn by both men and women in dance, ritual and on every festive occasion. 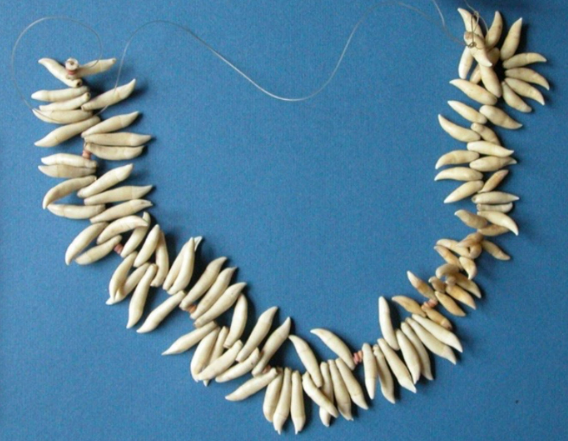 Dolphin teeth have been used as currency for hundreds of years on the Solomon Islands. They are small, transportable, and highly durable. You can identify them by sight and know that you getting paid what you supposed to be paid. That gives them an advantage over metal coins, which can be shaved or scraped to steal value from the coin. 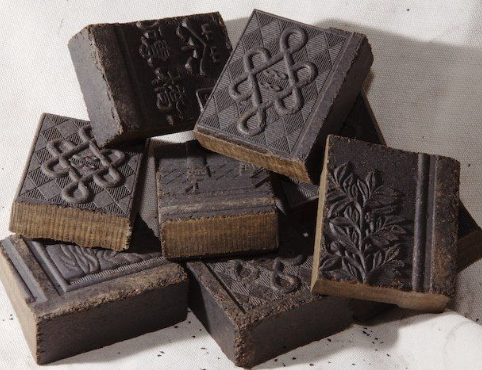 Tea bricks or compressed tea are whole tea leaves or finely ground tea that have been packed in molds and pressed into brick form or block form or other shapes. This was most commonly used in ancient China prior to the Ming Dynasty, as a form of currency, instead of coins.

In ancient China, tea bricks were made with thoroughly dried and ground tea leaves that were pressed into various bricks and other shapes, although partially dried and whole leaves were also used. Some tea bricks were also mixed with binding agents such as flour or manure to better preserve their form for a longer period.

Tea bricks were the preferred form of currency over metallic coins for the nomads of Mongolia and Siberia. The tea was used as money, eaten as food in times of hunger and also medicine for treating coughs and colds. Value of these tea bricks varied depending on the quality of leaves and the distance and accessibility of the market.

Tea bricks were still used as a form of currency in Siberia as well, until World War II. 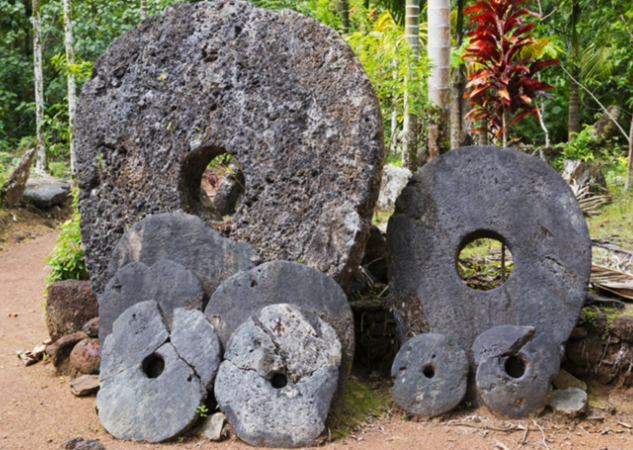 Rai stones are circular limestone disks with a hole in the middle. Size of rai stones varied from 1.4 inches to 140 inches in diameter. Each stone has its own value depending upon their history rather than size.

Rai stones are very valuable to the Yapese. They have been used in trade by the Yapese as a form of currency. Rai stone transaction is recorded in oral history and no physical movement of the stone is done due to its weight and risk of damage. It will be owned by the person to whom it is passed without the physical possession.

Rai stones were, and are still used in social transactions, such as marriage, inheritance, political deals, the sign of an alliance, or even in exchange of food. 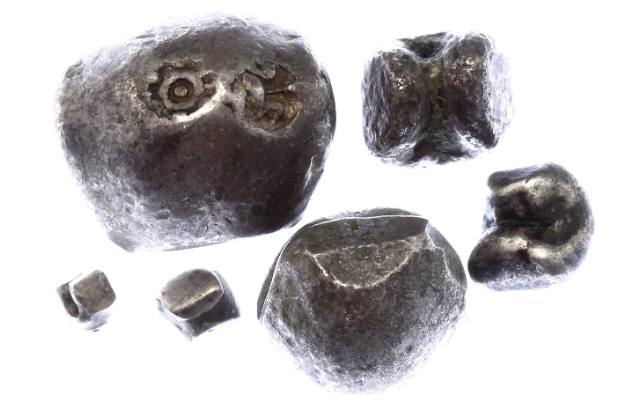 Pot Duang money were hand-made coins. Metal strips were bent and folded into spheres like a bullet, thus the name, bullet money.

King Ramkhamhaeng (1279-1298) is credited with introducing bullet coins during the Sukhothai period. Some experts think they were developed to resemble cowry shells, which had been used as money from ancient times.

Pot Duang was in circulation for 600 years from the Sukhothai era to Rattanakosin until its withdrawal from circulation during the reign of King Rama V in 1904.

The next coins of Siam. 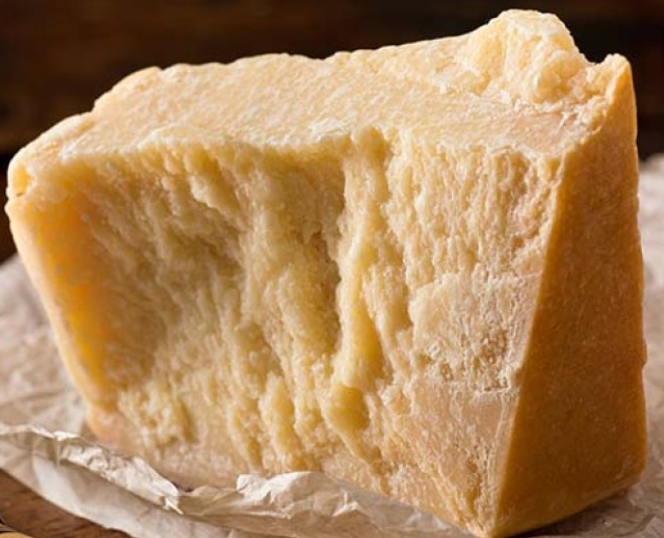 Value today around $337 per wheel.

Since 1953, Credito Emiliano, a bank in Italy's Emilia-Romagna region, offers loans in exchange for golden wheels of Parmigiano-Reggiano cheese as collateral. The more it ages, the more delicious and hence its value increases too.

If your business is looking for a bank loan, these are all good forms of collateral

When: Archaeologists believe that shell money could have been used as early as 1200 B.C., and it’s still in use today.

Cowry shell money Cypraea moneta, the small sea snail species were found in large quantities in the Indian Ocean and islands of the Indian ocean and were extensively used as currency in some countries in the trade networks of East Asia, South Asia, Africa, and Australia.

Shell money was in circulation until the mid-19th century in western Africa, while in Australia, shells were used for carrying out trade until the late 19th century. In China, the practice of using cowries as currency began in the 16th century BC. In Odisha, India, it was the official currency until the early 19th century.

They were very popular as a choice of currency since they were small and were easy to count and carry. Shell money usually consisted either of pieces of them or whole seashells, which were often worked into beads or were otherwise artificially shaped.

Salt possess the ability to preserve food that made it a highly valuable commodity during the Roman Empire and throughout the Middle Ages Salt was very popular in the Roman Empire. During the rule of the Roman empire, soldiers and other civil servants were paid with salt.

It was used as currency and was also traded in the barter system. In recent history, salt bars and salt bricks were used as money in Ethiopia until the 20th century 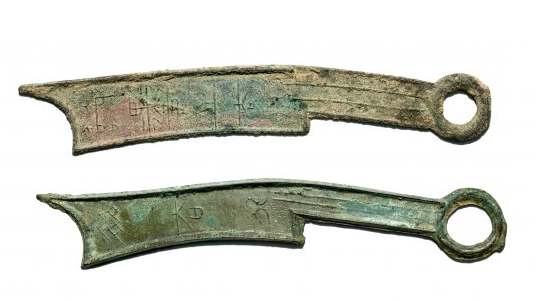 The ancient Chinese state of Qi during the Zhou dynasty issued knives as the official currency with their values engraved on them, from 600 BC to 200 BC.

The various types of knife money were, Qi knives, Pointed tip knives, Needle tip knives, Boshan knives, Ming knives, and Straight knives. However, the knives being heavy and not easy to carry, the practice was abolished later during the reign of Emperor Qin Shi Huang (259-210 BC) and he introduced round coins with holes as the official currency.

Crypto currency is a form of digital currency that can be purchased, transferred and/or sold using cryptography.

It is a decentralized electronic currency without a central bank. It is not tangible and it only exists electronically.

Each electronic currency is supported by a decentralized peer-to-peer network called the blockchain. The blockchain is a digital ledger of any transactions and it ensures that all crypto currencies are kept track of. Cryptocurrency value is not fixed, it fluctuates. Cryptocurrency gets its value from demand and supply.